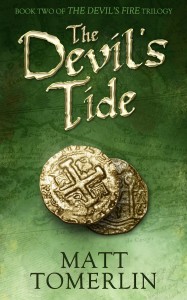 The final manuscript has been turned in and is currently being edited. “The Devil’s Tide: Devil’s Fire Book 2” will be available on Amazon Kindle by July 31st.

A young pirate narrowly avoids the gallows when the governor of the Bahamas enlists his aid in bringing hostage-turned-pirate Katherine Lindsay to justice. A pirate hunter returns to his old ways, with the demons of his past swiftly following his trail. A beautiful strumpet falls in league with Blackbeard, witnessing his despicable crimes firsthand, before she becomes a pawn in his schemes. As all sides spiral toward a fiery climax, the odds are in favor of death, and those few who survive will never be the same.