After completing the 20+ hours of relentless terror that is Alien Isolation, I feel like I’ve been through hell. 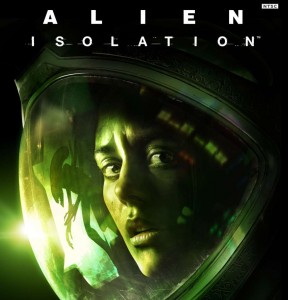 I happened across a revolver early on, but this is not a first person shooter, as I quickly discovered when I made the mistake of taking a shot at the alien during our first encounter. Bullets only cause him to bleed acid all over poor Amanda Ripley as he latches on. A flamethrower works better, but your best bet is to save the fuel (which runs out fast and is difficult to replenish) and hide in a locker or under a desk. Much of this game is hiding, crouching, sneaking through dark hallways, and praying he doesn’t spot you. Be careful using that flashlight, and whatever you do, don’t run. The A.I. on display here is impressive. Just when I thought I knew the alien’s pattern, he would surprise me.

The levels are massive, and perfectly capture the aesthetic of Ridley Scott’s first film while exploring the full potential of his designs and taking them to the next level. Computers are no less antiquated than they were in the original film, housed in bulky yellow monitors, with pixelated green text that makes all the familiar bloops and beeps as it streams across the screen. Compulsively checking the motion tracker becomes habit, even though looking at the little green screen annoyingly blurs anything beyond that field of view (a nice detail). You can refocus your distant vision with the tap of a button, but that blurs the motion tracker. On Xbox One, this game sports incredibly detailed environments, with naturalistic lighting, steaming vents, and terrifying shadows.

The last three hours were the most intense “entertainment” I’ve ever experienced, and I doubt I’ll be getting a good night’s sleep any time soon. It was almost too much to handle, especially two thirds of the way through, where the game alarmingly transitions from Ridley Scott’s slow burn into James Cameron’s in-your-face breakneck pace when Amanda Ripley reaches an enormous and frightening generator room at the heart of the space station she is so desperately attempting to escape. Soon she finds rooms full of strung up victims and hatching eggs. The first time a facehugger lived up to its name, I involuntarily threw my controller.

Aliens are not the only enemy, of course. Some of the humans you encounter are a problem. It’s fun to dispatch them by tossing handmade “noisemakers” their way and watching the alien go to town. You don’t want to shoot at them, because the sound will only draw the alien down on you instead. There are also creepy, cheaply-manufactured androids made by a competitor of Wayland Yutani. These guys would make Peter Wayland scowl in disgust in much the same way Apple’s Jony Ive scowls at Android phones.

I was skeptical of the Ripley’s daughter plot at first, but Amanda proves a very strong character of her own, and the premise works well enough in a non-canonical video game. Andrea Deck does a wonderful job voicing her, complete with convincingly exasperated fucks, shits, and “CHRIST!” when she barely survives a close encounter. Sigourney Weaver provides some new dialogue, although I won’t reveal why and how. There are quite a few Easter eggs tying it all to the first movie, and even a few Prometheus references. Also, there’s a flashback mission where you’ll explore the derelict that started this whole mess.

Any Alien fan owes it to him or herself to play this one, provided you don’t mind spending several nights suspicious of the shadows in your bedroom… when you’re not dreaming of facehuggers fucking your mouth.