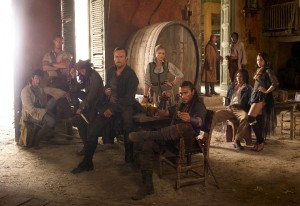 Black Sails immediately captures the brutality and theatricality of pirates with an opening that is as fearsome as it is breathless. The action is smartly portrayed from the perspective of the victims, as their ship is mercilessly set upon by vicious pirates. This exciting opening sparks a plot that is intended to lead directly into Treasure Island.

Black Sails is a stunning, lavishly detailed production, blurring the lines between big budget film and television. Bear McCreary provides a stirring score that isn’t overly piratey. The acting is surprisingly solid from a cast that is generally a little too good-looking. I’m not yet sold on this interpretation of John Silver (Luke Arnold). His charming rogue-ishness seems a little forced, and is one of the few genre cliches to be found. Of course, this is a younger Silver, before the loss of his leg. Captain Flint (Toby Stephens), on the other hand, is a very interesting character, and has some fun interplay with his quartermaster.

The dialogue (particularly Hannah New as the hard-as-nails Eleanor) seems to be trying a little too hard to be Deadwood at times. Poetic vulgarity is difficult to pull off, though Black Sails gets props for trying. There’s room for improvement here, but even the finest shows have spent much of the first season finding a specific voice and tone. This one starts out more confident than most, but it still needs a little work. A bit more humor wouldn’t hurt.

As a rabid fanboy of historical pirates, I appreciated much of the detailed authenticity of the setting. Real historical pirates make an appearance, including “Calico Jack” Rackham (Toby Schmitz) and Charles Vane (Zack McGowan). They’re only shown briefly in the pilot, but I’m looking forward to more. The only historical element I was put off by was the portrayal of Anne Bonny (Clara Paget). By all accounts, Bonny was attractive, brash, and Irish. Black Sails gives us a fetching (even though they try to hide it) but mousy tomboy with what sounded like a British accent. This characterization would be far better suited to Anne’s partner in crime, Mary Read. Still, we get a brief glimpse of a potentially fun and formidable female character.

The show appears to use CG for the longshots of ships at sea, which took a little getting used to. I’m sure there’s no other way, given that filming actual ships at sea is probably way too expensive for a TV show. The establishing shot of Nassau, however, is utterly breathtaking. Everything on deck is very convincing and appropriately grimy.

I like that, apart from Silver, it’s not treated as a self-referential pirate story thus far. It’s all very gritty and realistic. There’s a brutal sword fight at the end of the episode that Neil Marshall (The Descent, Centurion, and an episode of Game of Thrones) directs with his usual bloody fanfare.

There’s a lot to like here, but these characters will need to evolve in subsequent episodes to keep up the momentum. It’s certainly a better start than Spartacus had, and that show turned out great. Time will tell, but this is a promising first episode in what looks to be an exciting show, and I can recommend it on the production values alone.