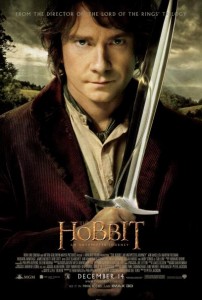 The main problem with movie critics is that they’re doing a job. Many of them were clearly paying more attention to their watches than The Hobbit: An Unexpected Journey. Personally, I relished the time spent in Middle Earth. The leisurely pace allows every scene to flourish and breathe. This is old fashioned cinema.

Martin Freeman does a good job as the intentionally stilted Bilbo, who is far more courageous than he knows. Freeman never goes over the top with his performance, and he’s somewhat of a relief from the oh-so-innocent Frodo. However, my favorite character was Thorin. Richard Armitage was perfectly cast. The relationship between him and Bilbo is the heart of this movie, and it builds toward a wonderful payoff. If this hadn’t worked, nothing else would have.

I don’t think any narrative magic would have me reciting all of the dwarves’ names on command, but they are all visually distinctive, and they feel like individuals. They are constantly moving and talking, and I’m sure I missed a lot of what they were saying because their dialogue is not always focused on. Every once in a while I’d catch some hilarious bit of background dialogue.

The cameos were nicely done, especially Bilbo and Frodo (Elijah Wood does not age). I loved that the older Bilbo sequence takes place *right* before Fellowship begins. Christopher Lee’s scene mostly foreshadows coming events with Saruman, although he already seems so dark that it’s kind of strange no one sees his betrayal coming.

The movie is not as emotional as any given Lord of the Rings movie. Dramatic beats are not milked for everything they’re worth, and the camaraderie never gets as hammy as it could get in the previous movies. I found this to be a welcome relief.

Most of the effects are a step above Lord of the Rings, which makes the bad effects all the more jarring. Azog The Defiler looks surprisingly awful, as if he wasn’t finished. I’m honestly not sure why this character was CG. The Goblin King, on the other hand, is exceptionally detailed (with a chin that will have parents exchanging nervous glances). The warg effects are pretty much just as flawed as they were in The Two Towers (especially when they’re running around in a field in broad daylight).

Despite some questionable effects, this movie was very easy on the eyes. The detail and scale of Goblin Town (which was the inspiration for Pirate Town in The Devil’s Tide, FYI) blew my mind. I can’t wait to watch this part again, because there’s so much going on. Gollum and his cave look great. Rivendell is absolutely stunning. I wanted to pause the film at times just so I could drink in every detail of an image, even though Peter Jackson kindly lingers on establishing shots.

A 6.3 Earthquake jolted our theater in Anaheim right as Bilbo was posing his final riddle, but no one made any move to leave their seats. In fact, I heard this exchange: “Was that an earthquake?” “Yes. Shh.”

The action scenes in the final half are excellent, although I found the thunder battle somewhat tedious, and I’m not sure it even needed to be in the movie. Sure, it looks cool, but it didn’t serve much of a purpose. The physics are more cartoony than Lord of the Rings. Characters can survive falling from ridiculous heights or being crushed by debris.

Howard Shore’s score is like a familiar warm blanket. Themes from Lord of the Rings seep into several scenes. The heroic dwarven theme is so stirring that I wanted to jump into the action and fight alongside these guys. I’m guessing Shore will add more themes in future installments.

The final moment is touching. Again, Jackson never gut punches you with emotion in this film, but I did get a sizable lump in my throat when Thorin finally sees Bilbo for who he is.