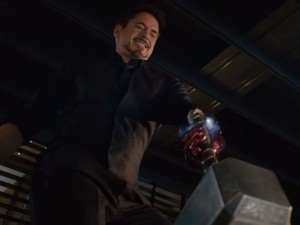 There’s quite a lot going on in Avengers: Age of Ultron, yet all of it starts to blend together about an hour in, which is around the time that I realized this was the exact same movie all over again, with twice the action and half the attention span.

I don’t know much about Ultron’s comic origins but it HAS to be better than this. There is maybe two minutes of development, which is just enough to prove that Tony Stark is about as intelligent as your average toddler shoving his finger in a light socket to see what happens. Based on this movie, I have no idea why Ultron is so popular. James Spader’s dialogue was occasionally funny (there’s a great exchange between him and Andy Serkis), but mostly he’s just promising death and destruction and all the other scary stuff we’ve heard from every Marvel villain so far. In the words of Janosz from Ghostbusters II, “I know, you told me all this.”

I didn’t understand Vision’s origin at all, even as it was being breathlessly explained after he randomly materialized. I’m sure someone more invested in the character could tell me what it all meant, but no amount of #marvelsplaining is going to fix the movie’s basic storytelling flaws. A movie should never rely on knowledge of the source material to be enjoyed.

The plot continues to depend on the lazy “character gets hypnotized by magic” device to pit allies against one another, because we didn’t get enough of that in the first film apparently. Even when they’re not entranced by Scarlet Witch or by Loki’s scepter, they’re bickering needlessly. There’s one almost interesting sequence where we see the Avengers’ fears and regrets come to life, but none of these moments have room to breathe. This felt like a small remnant of that more personal Avengers movie Whedon claimed he wanted to make.

The Natasha/Banner romance is odd. We’re suddenly expected to believe they always had smoldering chemistry. There’s some really silly flirtation between them at a party early in the film. There’s a scene where Natasha is wearing nothing but a bath towel and Banner doesn’t even seem tempted, which doesn’t exactly warm me to him. I get that he’s afraid of Hulking out during sex, but his whininess makes him hard to root for. Captain America and Black Widow had much better chemistry with far less dialogue in The Winter Soldier. And then there’s the totally pointless admission from Natasha that she can’t get preggers, and the sad way she pretends she doesn’t care about that. Would it be so bad if she truly didn’t care? It’s depressing to see her reduced to this cliché after such a strong turn in The Winter Soldier.

I liked Hawkeye this time around, as he had some of the best lines and he felt more like an everyman than anyone else on the team. Scarlet Witch was visually cool, and Elizabeth Olsen’s Eastern European accent is perfect. There’s just not enough of her, and she could easily sustain her own movie. Quicksilver gets the least screen time of anyone, but Aaron Taylor-Johnson makes the most of what he has.

This movie is bogged down by its transparently petty need to show Man of Steel how much more “responsible” it is (since Marvel fanboys decided to fixate endlessly on the mass destruction at the end of Man of Steel). Way too much time is spent showing the Avengers saving the civilians, who, ironically, they put in danger in the first place. The greatest villain of the picture is Tony Stark, who started this whole thing by sticking his finger in that light proverbial socket. It didn’t shock him, just everyone else. He gets some flak from the team, but not nearly as much as he should (and they’re all such jerks to each other it’s hard to tell when they’re actually angry). He should have been kicked out immediately.

There are some cool action sequences, but nothing tops the siege on a Hydra castle in a snowy forest at the start of the film, where the skirmish moves along like the panels of a comic book in an unbroken shot, reintroducing each Avenger. The Hulk vs. Hulkbuster fight is fun, but it feels like it was thrown in just because “HULK VS. HULKBUSTER!!!” and there aren’t any major consequences because of it.

After that first hour, the action becomes cynical in its waves of CG explosions and debris-scattering repetition, as though Whedon resented the bloated, mindless movie he realized he was making. The climax is a retread of the first movie in a less interesting setting, with the heroes mowing down hordes of generic CG enemies like a video game (first faceless aliens, now faceless robots). I was never worried for any of the Avengers. I never for a moment thought Ultron would win. It was all very familiar, and very exhausting.

“I’m in a loop,” yells Bruce Banner in a bout of frustration, after events have become too repetitive even for him. “I’m caught in a time loop.” I get the impression Whedon snuck in that line late in the production, shortly before he informed Marvel he would not return to direct a third.