(Spoilers contained within. Ye be warned.) 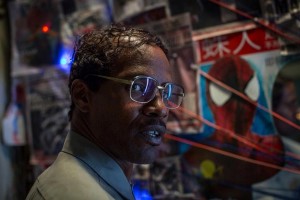 Name’s Electro. The “DERP” is silent.

Thanks to Andrew Garfield and Emma Stone, the Amazing Spider-Man 2 doesn’t entirely suck. It only kind of sucks. It really sucks whenever Electro (Jamie Foxx) is onscreen, and composer Hans Zimmer, who apparently had one shroom too many while writing the score, insists on generic dubstep with a repetitious chant (“You used me! You lied to me! You are dead to me! Spider-Man is my enemy!”) evidently meant to echo the voices in Electro’s head. Unfortunately, the voices in Electro’s head are morons, and so is the character.

Before he becomes Electro, Foxx plays the under-appreciated Oscorp worker-bee Max Dillon with a nerdy passive-aggressiveness far too reminiscent of Jim Carrey’s Edward Nigma in Batman Forever. In a scene ripped from another Batman movie, Max is wandering down the very same street that Spidey happens to be battling an angry Paul Giamatti (I’ll get to him later), carrying a bundle of blueprints, which he of course clumsily drops, because that’s what Selina Kyle did in Batman Returns. Spidey saves Max’s life, because that’s what Batman did in Batman Returns. In a new development that the screenwriters came up with all on their own, Spidey notices Max’s name on his name tag, and addresses him by name while basically mocking him and his silly comb-over. Max is immediately smitten, overjoyed that Spidey has acknowledged him, and too stupid to realize he’s being mocked by a superpowered hipster in spandex. He instantly becomes infatuated with his new best friend, and we’re treated to some excruciating scenes of him in his creepy apartment, pretending to have conversations with Spider-Man. He even makes himself a birthday cake and pretends Spider-Man gave it to him. Very important character stuff to contribute to the two hour and twenty-two minute runtime. After Max falls into a vat of electrified eels (oh, that whacky Oscorp!), he transforms into a phosphorescent lightbulb who is basically an entirely different character than the one before. There’s no transition from Max to Electro. It’s the same actor, but a totally different performance. Any character development, shitty though it was, is abandoned after Max’s transformation, and we’re left with an ego-maniac who is pissed that Spider-Man BRIEFLY forgot his name. Yes, you heard that right. SPIDER-MAN FORGOT MAX’S NAME FOR A SPLIT SECOND. END OF MOTIVATION. This is worse than the time Tony Stark denied Guy Pearce a threesome in his hotel room. 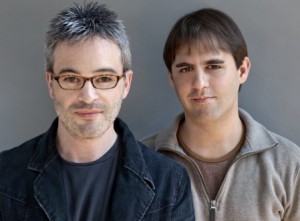 Since there’s some unwritten rule that comic book sequels must have two villains, we also get a new incarnation of Green Goblin, this time played by Dane Dehaan. He begins as Harry Osborn (you know, that goofy rich guy James Franco played in the Sam Raimi movies?). Amazing Spider-Man 2 does away with the original Green Goblin, Normon Osborn, fairly quickly, and goes straight to Harry. Harry and Peter Parker were besties a whole eight years ago (the time gap is probably meant to account for Harry’s absence in Amazing Spider-Man 1). Peter shows up to offer his condolences after he hears that Harry’s father has passed of a mysterious flesh-rotting illness that will eventually claim Harry as well. Harry learns that the only cure is Spider-Man’s blood… or just don’t eat at Arby’s. Elder Osborn and Peter’s father uncovered the cure by genetically engineering spiders years back, before Normon had Peter’s dad killed… for some reason… I dunno. It is also revealed that Peter’s father injected his own blood into the genetically engineered spiders… therefore only someone in the Parker bloodline can benefit (anyone else will just be driven super nuts, as poor Harry Osborn discovers). So apparently it’s a one in seven billion coincidence that PETER was the hapless dumbass who strolled into Oscorp in the prior filmand got bitten by one of those special spiders. You can thank the masters of lazy coincidental plotting, Roberto Orci and Alex Kurtsman (Star Trek 2009) for that nonsense. Remember the part where Kirk gets banished by Young Spock from the Enterprise to a random planet, only to encounter Old Spock in the first cave he runs into? It’s like that. Anyway, Harry goes evil MUCH quicker than he did in the Sam Raimi trilogy, before we’re given any real time to figure out whether we should give a shit about Harry Osborn. He needs Spidey’s blood, but Spidey won’t give him his blood, because for no conceivable reason Spidey suspects his blood will cause Harry to go evil (even though Spidey doesn’t find out about that until later in the film). Luckily, thanks to the wonders of Orci and Kurtzman, Harry finds some leftover genetic spider blood in Oscorp, and he injects himself, instantly turning into a hideous Goblin who is Green. Around the third act he makes a pact with Electro to kill Spider-Man, because that’s what Venom and Sandman did in the third act of Spider-Man 3, and why not copy that cinematic masterpiece? 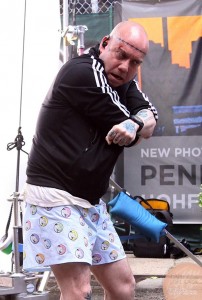 Yep. Those are rhinos on his boxers.

Oh, there’s one more villain, just in case your five year old was becoming more interested in that curious floppy thing between his legs than the movie at hand (I am, of course, referring to the Twizzlers you paid a totally reasonable $8.50 for). Actually, there are two more villains. Zere’z a mad scientizt wiz a ztereotypical German accent (probably some obscure comic character that one nerd in the audience splooged himself over) and an angry Russian named Aleksei Sytsevich (Paul Giamatti), WHO SCREEEAAAMS EVERY LIIIIINE OF DIAAALLOOOOOOGGGGUE. I’ll let Paul do the talking on this one: “He’s a Russian mobster. Russians are always good villains. I have an ability to just destroy things. My accent is pretty hammy. I loved doing it. It seemed to me like an opportunity to be as over-the-top hammy as possible. It was really fun.” Well there’s a glowing endorsement. Comic book readers will recognize Sytsevich as the man who will become an aborted version of a beloved villain named Rhino. No one else will give a shit, which makes me wonder what the point is. Early in the film, Spidey defeats Sytsevich by pulling his pants down and exposing his boxers… which have colorful little rhinos on them. Worst foreshadowing ever, or the best? I’m not sure.

Anyway, it probably sounds like I hated the movie, but I didn’t. It has “Spider-Man” in the title, and in that regard, it doesn’t disappoint. Garfield is the definitive live action Peter Parker/Spider-Man, as far as I’m concerned. He enrages his foes not just with impenetrable webbing, but a ceaseless barrage of lazy gestures and careless snark. I’ve seen lots of critics harp on this element, which makes it obvious that they have no idea who Spider-Man is or why people like him. I want more Spidey movies with this guy. I want better Spidey movies with this guy. If Garfield had been in the originals instead of the woefully miscast Tobey Maguire, we might have had something truly special. He’s a genuinely good actor, and not just a good comic book movie actor (like that Thor guy with the chiseled physique I am not at all envious of).

Stone is once again irresistibly lovable as Gwen Stacy, although she isn’t given much to do until the very end. The film sizzles whenever it allows Peter and Gwen a quiet moment to lose themselves in one another, even though they’re constantly trying to break up because drama dictates that drama is dramatic, therefore there must be drama. The screenplay drags these two around like puppets, but the actors are so good they manage to make it all seem natural. Even when their dialogue is less than amazing, they sell it beautifully. Their awkwardness is sexy rather than annoying. It seems to take everything they have not to rip each other’s clothes off. I’d pay $12 just to watch them try not to fuck for two hours.

Sally Field is predictably wonderful as Aunt May. There’s a tearful scene between her and Peter that is painfully well acted, even though it leads to more convoluted plot about Peter’s bland parents, who the writers seem to think are so worthy of our time. Felicity Jones appears briefly as Felicia Hardy, who will presumably become Black Cat in one of the many upcoming sequels (where’s the white hair?). Strangely, Denis Leary reprises his role as the ghost of Gwen’s dad, whose bitter apparition occasionally appears to scowl disapprovingly at Peter. 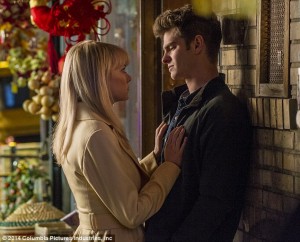 Amazing Spider-Man 2 gets props for pulling no punches with the ending. There’s been a lot of speculation over whether they would or wouldn’t go there, but they went there. It’s a brutal, effective moment. The visual that accompanies it is both disturbing and thematically poignant. They finally did what Raimi’s first movie failed to do. Spidey fans know what I’m talking about. Most people in my audience seemed shocked by it. Everyone got very quiet, except for a baby, who got very loud. It’s a crucial moment in Peter Parker’s life, along with the death of Uncle Ben, and it finally happened on film. And it was ruined by a baby.

As is to be expected, this is one expensive looking film. The effects are all top notch, even the glowing, blue-skinned Electro. The music is generally unmemorable, save for that stoopid Electro chant. I love Zimmer (his Pirates of the Caribbean: At World’s End score is one of the best of the last ten years), but this made me long for James Horner’s themes from the last one. Marc Webb directs action scenes with a little more confidence, but he excels with the smaller, more personal moments. The editing is generally solid, except for a zippy prologue sequence that speeds through too much story in too little time. Turns out it isn’t even necessary. Remove this and the film loses nothing. We already know Peter’s parents are dead… do we really need to see it in a sequence that plays like a poorly-executed ripoff of the Dark Knight Rises prologue? I kept waiting for Bane to show up and make it a little more meme-worthy. “The franchise fatigue rises!”

The Amazing Spider-Man 2 is a hot mess, but there’s a decent story somewhere amid the clutter. It could be improved by removing Electro and focusing exclusively on Harry Osborn as the villain, in order to earn his metamorphosis. It’s ridiculous that when one villain is vanquished, another immediately shows up to take his place for yet another climax. This movie has an agenda, and that agenda has nothing to do with this movie. Sony is so desperate to hold onto the rights to the character, they’re more concerned with setting up villains in the next six movies than they are with making a good piece of entertainment. And since it made $93 million over the weekend, there’s no reason for them to concern themselves with quality from here on out. Quality just gets in the way of selling as many toys as possible. Speaking of which, I’m off to the nearest Target to snag a Rhino action figure with pants-dropping-action.