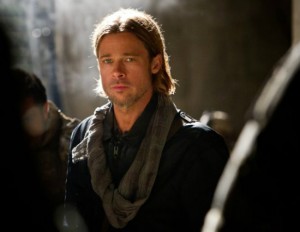 World War Z taught me that in a zombie apocalypse, scientists, army, and government officials will stand around waiting for Brad Pitt (a magical guy who used to do important stuff for the government, or something) to show up and point out the obvious. Brad Pitt is also the only man on earth capable of investigation, the powers of seeing the obvious, and the uncanny ability to walk down a darkened corridor with a crowbar to obtain something vital. No one thinks to do these things until Brad Pitt shows up to take the initiative. And after escaping millions of zombies, he does the stupidest thing imaginable because ONE ZOMBIE is blocking his path.

They gave away every money shot of this movie in the trailers, and the last third is generic stuff that you’ve seen on any given episode of Walking Dead, only with an even less interesting leading character running around being the Perfect Male. And could they have cast a more boring woman for his wife?? She’s a complacent wife whose entire purpose is to make women in the audience feel like they’d have a chance with Brad Pitt. She has no personality of her own. She’s just so goshdarn lucky she got to make two boringly perfect children with Brad Pitt. And she doesn’t put up much of a fuss when he leaves, because The Government Needs Him.

It’s directed by Marc Foster, director of the insufferable Quantum of Solace. He has no sense of pacing or buildup. His shakycam shakes at everything except the things you want it to shake at. The movie is saturated only in shades of shit-brown. Actors are dubbed over when it’s not clear why they’re doing what they’re doing. At one point, someone is bitten, but the shakycam starts shaking in the wrong direction, and you hear the actor yell something to the equivalent of, “Oh no! I’m bit!”

The complete lack of blood is almost offensive. Marc Forster is either very desperate to get a PG-13 (and thinks that PG-13 movies must be bloodless), or he has hemophobia. Maybe he passes out when he sees red. He’s afraid of violent sounds, too. When a machete is used to hack off someone’s arm, it makes a pathetic “whoosh” noise. This movie had no balls, and thus very little impact. What’s the point of a zombie movie without a little gore?

The opening ten minutes of zombie-induced hysteria are somewhat intense. The jet sequence is suddenly not shit (kind of like the randomly good opera sequence in Quantum of Solace). The zombies are occasionally scary, when they’re not CG hordes. This is not the worst movie ever, but it reeks of too many cooks in the kitchen, and feels so very Hollywood. There are far better zombie movies.

If nothing else, it really made me want to watch 28 Days Later again.